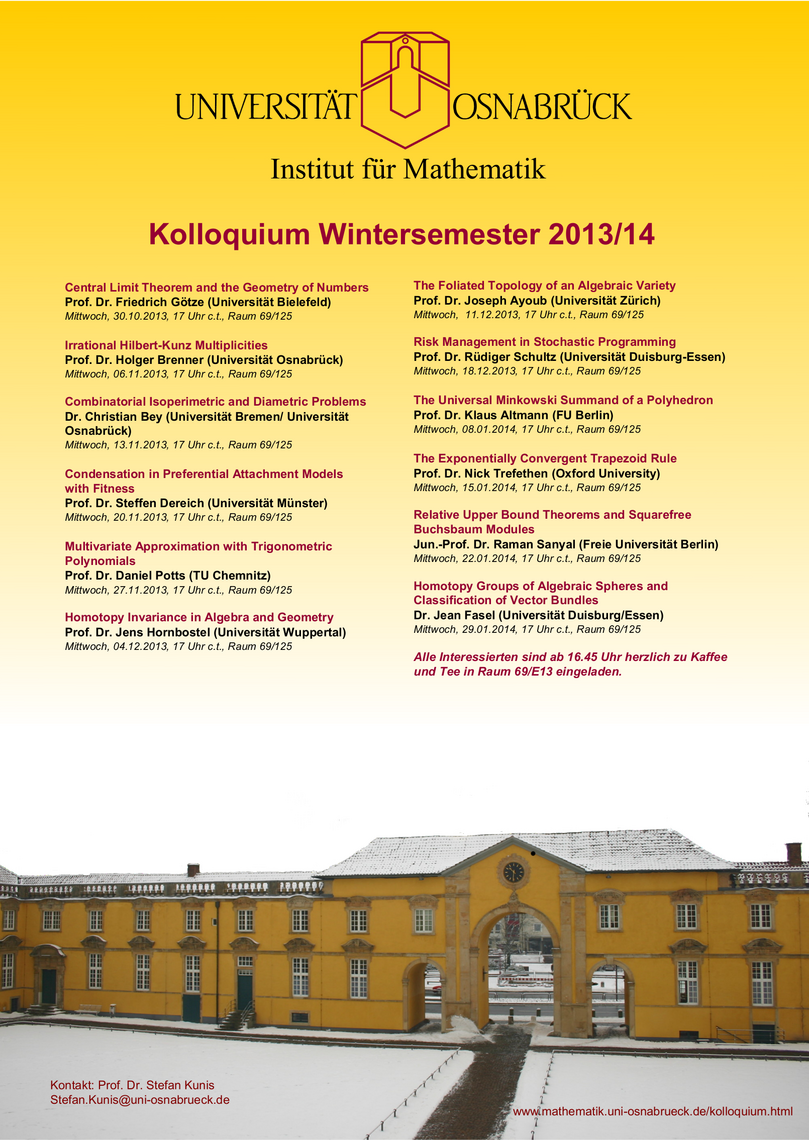 Central Limit Theorem and the Geometry of Numbers

The accuracy of approximation of the distribution of sums of independent random vectors by Gaussian distributions is fundamental for many applications. In particular approximations of the distribution of norms of such sums are of interest. It is shown how progress in this question is closely linked to classical problems in the geometry of numbers for balls and ellipsoids by Landau and Hardy. Recent optimal results in lattice point problems and the equidistribution on orbits of unipotent subgroups have led to progress in this problem for dimension 5 and larger.

The Hilbert-Kunz multiplicity is an important invariant of a local noetherian ring in positive characteristic. A question of Monsky asks whether this invariant is always a rational number, and many positive results were established. However, we show that there exists an example where it is an irrational number.

We survey isoperimetric and diametric problems for Hamming graphs and related ones, centering around the classical theorems of Harper, Kleitman, Erdös-Ko-Rado, and Ahlswede-Khachatrian.

A popular model for complex networks is the preferential attachment model which gained popularity in the end of the 90's since it gives a simple explanation for the appearance of power laws in real world networks. Mathematically, one considers a sequence of random graphs that is built dynamically according to a simple rule. In each step a new vertex is added and linked randomly by a random or deterministic number of edges to the vertices already present in the system. In this process, links to vertices with high degree are preferred. A variant of the model, additionally, assigns each vertex a random positive fitness (say a μ-distributed value) which has a linear impact on its attractivity in the network formation.
Such network models show a phase transition for compactly supported μ. In the condensation phase, in the limit, there is a comparably small set of vertices (the condensate) that attracts a constant fraction of new links established by new vertices. This condensation effect was observed for the first time by Bianconi and Barabasi in 2001, where it was coined Bose-Einstein phase due to similarities to Bose-Einstein condensation. The fitness of the vertices in the condensate gradually converges to the essential supremum of μ and in the talk we discuss the dynamics of this process.

In this talk, we present algorithms for the approximation of multivariate functions by trigonometric polynomials. The approximation is based on sampling of multivariate functions on rank-1 lattices. To this end, we study the approximation of functions in periodic Sobolev spaces of dominating mixed smoothness. Recently an algorithm for the trigonometric interpolation on generalized sparse grids for this class of functions was investigated by Griebel and Hamaekers. The main advantage of our method is that the algorithm based mainly on a one-dimensional fast Fourier transform, and that the arithmetic complexity of the algorithm depends only on the cardinality of the support of the trigonometric polynomial in the frequency domain. Therefore, we investigate trigonometric polynomials with frequencies supported on hyperbolic crosses and energy based hyperbolic crosses in more detail. Furthermore, we present an algorithm for sampling multivariate functions on perturbed rank-1 lattices and show the numerical stability of the suggested method. Numerical results are presented up to dimension d=10, which confirm the theoretical findings. This contribution is joint work with Lutz Kämmerer and Toni Volkmer (Chemnitz University of Technology).

Homotopy Invariance in Algebra and Geometry

A homotopy is a continuous deformation of an object or of a continuous map. Starting with the Poincare Lemma, we discuss several structures and invariants which are invariant under such deformations. The emphasis will be on algebraic examples, as e.g. in the work of Quillen and Suslin.

The Foliated Topology of an Algebraic Variety

In this talk I will describe and motivate the introduction of a new Grothendieck site associated to an algebraic variety. I will also give some computations of foliated cohomology groups with values
in different kind of foliated sheaves. I will also explain how this leads naturally to a higher differential Galois theory.

The Universal Minkowski Summand of a Polyhedron

Given a convex polyhedron Q, one can ask for the possibilities of decomposing it into a sum Q = A + B of simpler polyhedra. Some of these splittings can be considered as extremal decompositions - but the interesting point is that there might be several ones, i.e. Minkowski prime decomposition is not unique. This structure is captured in the polyhedral cone C(Q)of Minkowski summands of Q. It comes with a so-called universal Minkowski summand C'(Q) being a cone with a projection onto C(Q). This construction generalizes the so-called Cayley polytopes.
Via toric geometry, these objects have a direct meaning in algebraic geometry - they represent deformations of the singular variety associated to Q. In the easiest case, in dimension two, these are the lense spaces known from topology.

It is well known that the trapezoid rule converges geometrically when applied to analytic functions on periodic intervals or the real line. The mathematics and history of this phenomenon are reviewed and it is shown that far from being a curiosity, it is linked with powerful algorithms all across scientific computing, including double exponential and Gauss quadrature, computation of inverse Laplace transforms, special functions, computational complex analysis, and the computation of functions of matrices and operators. There are also interesting connections, not fully worked out yet, with trigonometric interpolation in uneven point sets and the Faraday cage effect.

The Upper Bound Theorem (UBT), conjectured by Motzkin and proved by McMullen, is one of the milestones of discrete geometry: Neighborly polytopes maximize the number of k-dimensional faces among all d-dimensional polytopes with a fixed number of vertices. Stanley vastly extended the UBT by showing that it remains true even when one allows simplicial spheres. In this talk I will consider a related upper bound problem: What is the maximal number of k-dimensional faces of the Minkowski sum P_1 + P_2 + ... + P_m of m polytopes with fixed numbers of vertices? This is a basic open problem that naturally arises in various areas of mathematics. What makes it difficult is that in contrast to the UBT, there are no natural candidates that prompt bounds. In joint work with Karim Adiprasito (IHES) we managed to give a complete answer to the Minkowski Upper Bound Problem. Following Stanley, we consider a more general question in combinatorial commutative algebra about relative simplicial complexes and squarefree Buchsbaum modules. The talk will be a tour from geometry to algebra and back. Along the way we will see various other upper bound problems that we can (re)prove in a uniform fashion.

Homotopy Groups of Algebraic Spheres and Classification of Vector Bundles

In this talk, we will first survey some classical results on classification of vector bundles over affine varieties. We will then present the modern approach to the problem and, time permitting, sketch the proof of some more refined results.

Lack of Symmetry Between Aisles and Coaisles in Stable Homotopy

In a 1943 paper, Benjamino Segre claimed that a smooth complex quartic surface contains at most 64 lines. However, his arguments turn out to be incomplete, if not plain wrong at some places. In my talk, I will give an overview of the history of this classical problem, starting from cubic surfaces, and then sketch joint work with Slawomir Rams which uses the theory of K3 surfaces and in particular elliptic fibrations to give a complete proof of the corresponding statement
over any field of characteristic other than 2 and 3.