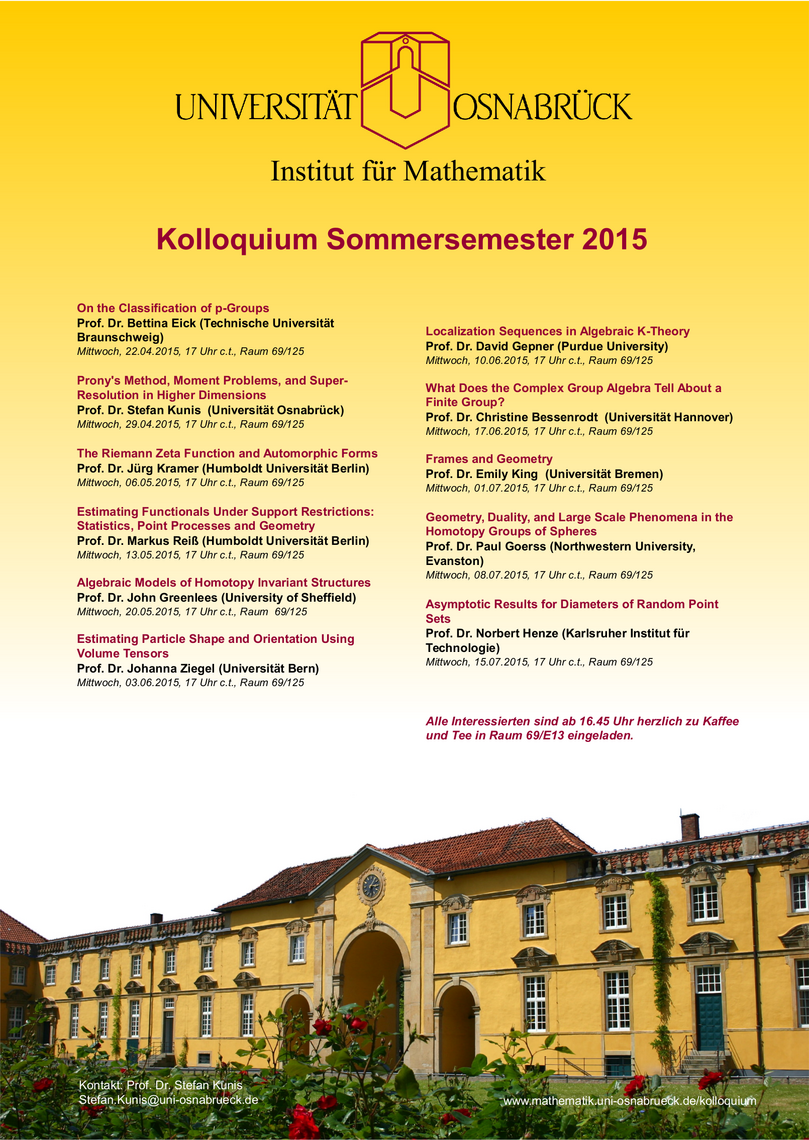 On the Classification of p-Groups

Prony's method is a prototypical eigenvalue analysis based method for the reconstruction of a finitely supported complex measure on the unit circle from its moments up to a certain degree. In this talk, we give a generalization of this method to the multivariate case and prove simple conditions under which the problem admits a unique solution. Provided the order of the moments is bounded from below by the number of points on which the measure is supported as well as by some small constant divided by the separation distance of these points, stable reconstruction is guaranteed. In its simplest form, the reconstruction method consists of setting up a certain multilevel Toeplitz matrix of the moments, compute the coefficient vectors spanning its kernel, and compute by some method of choice the common zero set of the multivariate polynomials whose coefficients are given in the second step. All theoretical results are illustrated by numerical experiments.

We consider two at first sight different statistical models: (a) observing a function f : [0,1] → with one-sided errors, (b) i.i.d. observations drawn uniformly from a set C in d . Each time we are interested in estimating a functional θ of the unknown quantity, e.g. θ =  ∫¹0 f(x)dx or θ = (C). Surprisingly, under regularity or shape constraints both problems are strongly connected and can be solved in an unexpected optimal way (”UMVU” for statisticians). The construction and proof relies on a beautiful interplay between probabilistic and geometric arguments. On the way we shall encounter martingales, point processes, Le Cam theory as well as missing volumes, monotone/convex hulls, separating hyperplanes and an open problem in stochastic geometry.

The study of homotopy invariant structures yields many examples of triangulated categories. One wants to be able to make calculations in them, to provide simple algebraic models or to recognize when they are equivalent. Leaving aside the homotopical context, the main ingredients are Morita theory, Koszul duality and rigidity. The talk will highlight general principles, but willl draw on three sources of examples. (1) the classification of differential graded algebras with exterior homology (2) modular representation theory and especially (3) rational G-equivariant cohomology theories, where work of Barnes, Kedziorek, Shipley and the speaker has given a range of examples that illustrate the techniques and results.

We develop statistical procedures for estimating shape and orientation of arbitrary three-dimensional particles such as cells in biological applications. We focus on the case where particles cannot be observed directly, but only via sections as it occurs in microscopy. Volume tensors are used for describing particle shape and orientation, and we derive stereological estimators of the tensors. These estimators are combined to provide consistent estimators of the moments of the so-called particle cover density. The covariance structure associated with the particle cover density depends on the orientation and shape of the particles. For instance, if the distribution of the typical particle is invariant under rotations, then the covariance matrix is proportional to the identity matrix. We develop a non-parametric test for such isotropy. The developed methods are used to study the cell organization in the human brain cortex.
This is joint work with Jens R. Nyengaard and Eva B. Vedel Jensen.

Together with trace methods, the localization sequence comprises one of the only known methods for computing algebraic K-theory. If R is a ring (more generally, scheme, ring spectrum, etc.) and R[f^{-1}] is a localization of R, there is a fiber sequence of K-theory spectra K(fiber) --> K(R) --> K(R[f^{-1}]). In this talk, we will show that (under mild conditions) the fiber term is compactly generated by a ring spectrum which is not in general K-equivalent to the quotient R/f. This answers a question of Rognes on higher chromatic analogues of the localization sequence of Quillen for a Dedekind domain. We will also sketch how this fits into a general programme (due to Waldhausen, Rognes, Ausoni, and others) to understand the K-theory of the sphere in terms of the chromatic filtration of the stable homotopy category.

What Does the Complex Group Algebra Tell About a Finite Group?

In the representation theory of finite groups, a lot of research has been inspired by a famous list of problems that Richard Brauer presented in 1963. Problem 2 asks:   When do nonisomorphic groups have isomorphic group algebras? In the talk, we will focus on the classical representation theory over the complex numbers. The complex group algebra is just a direct sum of matrix rings whose sizes are given by the multiset of dimensions of the complex irreducible representations of the group. The wider questions investigated in this area are then: What do these dimensions tell about the structure of the group? What information can we obtain from just the set of dimensions? Both classical as well as some recent results on these questions will be considered in the talk; deep results of this kind often crucially use the classification of finite simple groups.

When searching for finite unit norm tight frames (FUNTFs) of M vectors in $\mathbb{F}^N$ which yield robust representations, one is concerned with finding frames consisting of frame vectors which are in some sense as spread apart as possible. Algebraic spread and geometric spread are the two most commonly used measures of spread. A frame with optimal algebraic spread is called full spark and is such that any subcollection of N frame vectors is a basis for $\mathbb{F}^N$. A Grassmannian frame is a FUNTF which satisfies the Grassmannian packing problem; that is, the frame vectors are optimally geometrically spread given fixed M and N. A particular example of a Grassmannian frame is an equiangular frame, which is such that the absolute value of all inner products of distinct vectors is equal. The relationship between these two types of optimal spread is complicated. The folk knowledge for many years was that equiangular frames were full spark; however, this is now known not to hold for an infinite class of equiangular frames. The exact relationship between these types of spread will be further explored in this talk, as well as Plücker coordinates and mutual coherence, which are measures of how much a frame misses being optimally algebraically or geometrically spread.

Geometry, Duality, and Large Scale Phenomena in the Homotopy Groups of
Spheres

The core project of homotopy theory is to calculate the homotopy classes of maps between finite simplicial complexes. However, even when the complexes are spheres, low dimensional calculations appear noisy and random. The key to developing structure was to find large-scale periodic phenomena, a point of view initiated by Adams in the 1960s using K-theory. Forty years later we have gotten very good at this, especially after work of Hopkins and his coauthors connecting this study to arithmetic geometry, including the geometry of elliptic curves. In this talk, I hope to offer a window into this world, and explain some of the beautiful patterns we have found.

Let X_1,X_2,... be independent and identically distributed d-dimensional random vectors. Writing M_n for the maximum Euclidean distance among X_1,...,X_n, we review conditions on the distribution of X_1 under which M_n, after a suitable normalization, has a non-degenerate limit distribution, and we pose some open problems.